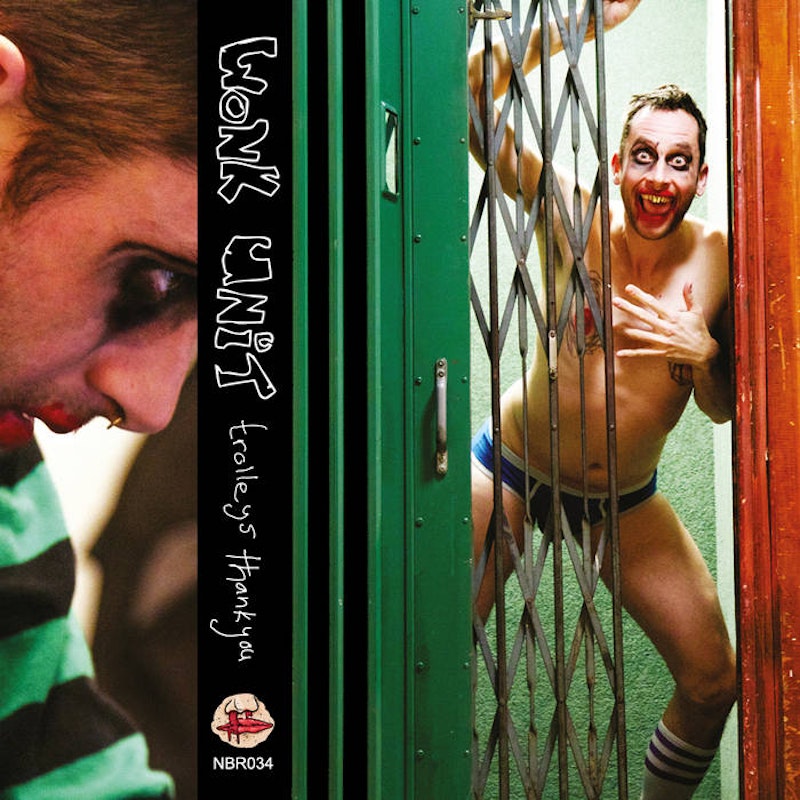 We only have a couple of copies of Wonk Unit’s brilliant second album ‘Trolleys Thank You/Wonk Unit Saved My Life’. This was released on tape by Nosebleed Records in Belgium and they have now sold out. This is an edition of only 50 copies.
A few quotes from Alex Wonk about the album:
'I’d recently moved to Los Angeles so Wonk was kinda on a hiatus. The line up of Jap Flag had kinda disbanded whilst I was away. So on my return and after seeing Snuff’s Duncan Redmonds, standing in on drums for Leatherface, I approached him about doing a few drum sessions for us. 4 sessions later and Trolleys Thank You was born. A melancholy mix of brand new and old songs dating back to when The Flying Medallions broke up. Having Duncan join us for this record was literally a dream come true. Snuff were the soundtrack to my youth and Duncan is a total hero of mine!'
'…the name Trolleys Thank You came from an ex girlfriend of mine who used to go out and take photos of all her friends naked in the middle of the night yeah? They’d all go out, drink cider, go around the streets and she’d take snaps of them with their cans of Strongbow and their fags yeah? They’d be in Sainsburys car park and she’d put up a blog with all her little girly mates and one of the pictures was brilliant. It was just this girl, Fiona, sitting in a trolley in just a little pair of knickers, Benson, cider and she was just underneath a Sainsburys Trolley bay that said Trolleys Thank You. I loved that. I thought that photo was brilliant and was like “That’s the name of the album”. Then literally two weeks before the album went to press I phoned her up just to make sure it was still ok for us to use that photo and it turned out that some-one had stolen those photos from the blog and made a fake Facebook profile with this girl with her breasts out, so she’d got a lot of crap from it, so she didn’t want us to use that photo. So that’s why I’m naked on the front cover, because I recreated it, or tried to. That was me on the way to Sainsburys carpark in the lift.'
'The whole record is essentially 2 EP’s. Wonk Unit Saved My Life” features Adam Stone (From The Apostates) on drum duties. Adam like me is a recovering alcoholic and was in a bad way when he first joined the Wonk. He turned up one day with “Wonk Unit Saved My Life” inked on his stomach so that became the name...'
Weight shown below is for shipping purposes only.
:
plus shipment
Weight:
Product currently not available