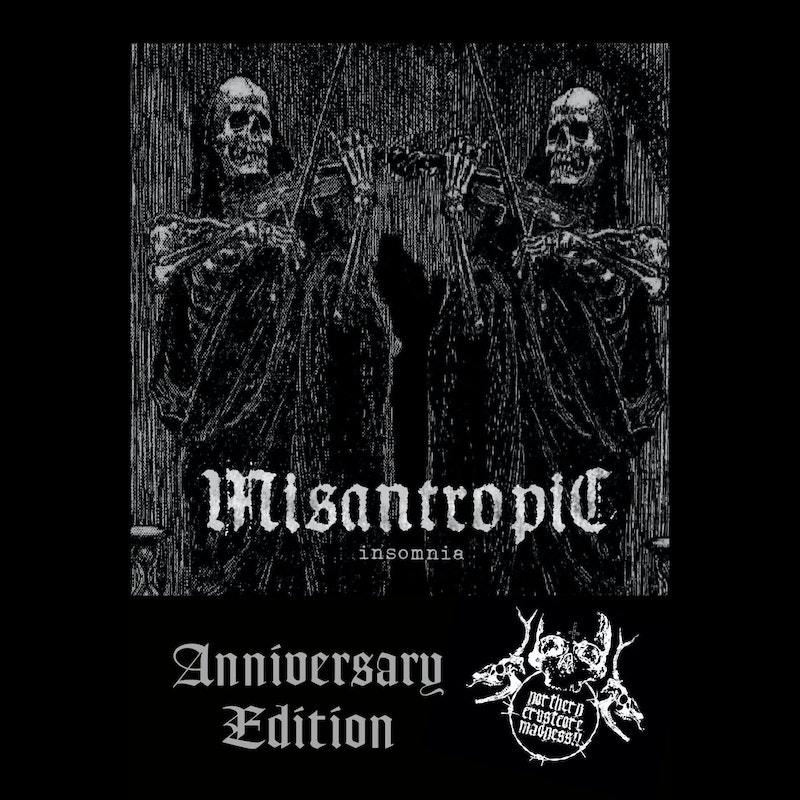 We are massively proud of the second release on our label....a special anniversary edition of Misantropic’s frighteningly brilliant ‘Insomnia’. This is without doubt one of our favourite albums so huge thanks to the band for allowing us to do this.
So, as it’s an anniversary edition, we had to put together a great package.
The pro-duplicated cassettes, with on-body printing, come in individually numbered metal tins which are printed top and bottom. Then there is a 12 page, A5 sized, colour booklet full of lyrics, photos and an intro written by Matte from the band. And these come in small cotton bags which we have printed with one of the bands old live backdrops. Of course we are biased but we think it looks bloody awesome....hopefully you can tell from the photos.
And the music? Well, obviously, you get the 7 bone crushing songs from ‘Insomnia’. Then, on the B-side, we have made a bootleg of another 7 songs. We have the 2 tracks from their split EP with Deathrace. The other 5 tracks are live and include covers of songs by Mob 47, Nausea and Doom.
This is another non-profit release and we have also made a donation to Rojavakommittéerna  (www.rojavakommitteerna.com) as a thank you to Misantropic for allowing us to release this.
Only 30 copies have been made, and 10 of these have been sent to the band, so be quick if you want a copy as this really is a great looking and sounding package. Also comes with a download code.
Track Listing:
Insomnia
Man Into Beast
Born To Die
Raise the Gallows
Holocaust
Insomnia
Lord Of War
A Life Lost
Bootleg
Man Into Beast (From the 2009 split EP with Deathrace)
Holocaust (From the 2009 split EP with Deathrace)
Cybergod (Original by Nausea. Live 19/12/2007)
Raise The Gallows (Live 21/08/2010)
Insomnia (Live 21/08/2010)
Fear Of The Future (Original by Doom. Live 2011)
Animal Liberation (Original by Mob 47. Live 09/10/2015)
Released on 21 November 2020.
Cat No: Dead 2.
Weight shown below is for shipping purposes only (Unfortunately this doesn't qualify for large letter postage rates and has to be sent as a small parcel).
:
plus shipment
Weight:
Product currently not available